Mark used a computational approach to research ribosome stalling trends in ribosome profiling and mRNA sequencing data from a wide variety of genes. He hypothesized that ribosomes would stall more along “elongation-limited” transcripts that have fewer footprints near the start and stop codons than “initiation-limited” transcripts that have a large fraction of ribosome footprints at the start codon. And in fact, he found that ribosomes in amino acid-deprived cells stalled more along these transcripts. By contrast, he observed no relationship between read density near start and stop and disparities between mRNA sequencing reads and ribosome profiling reads. This research identifies an important relationship between read distribution and propensity for ribosomes to stall, although more work is needed to fully understand the patterns of ribosome distribution along transcripts in ribosome profiling data. 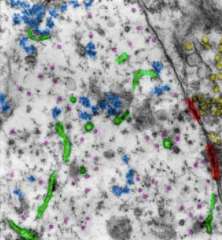 Peer-reviewed article accepted by the Journal of Emerging Investigators (to be published soon).

I loved the Polygence experience, and I thoroughly enjoyed my time spent with my mentor, Michel. Whether it was explaining a difficult concept that I had not fully understood from a research paper or walking me through coding difficulties, he has helped me take my first steps into the realm of professional science. Though this program, I was able to have a hands-on experience learning about the research process. Not only was I able to go through the motions of publishing a paper (a skill that is extremely valuable for an aspiring scientific researcher like myself), but I was able to delve into a biological concept in great detail while picking up useful computational skills. For me, the most valuable part of my Polygence experience was the ability to gain professional-like experience in a field I plan to pursue in the future.