When we think about STEM research and science experiments, we often picture white coats, wet labs, and expensive machinery. But most young people interested in STEM don’t yet have access to these resources. Luckily, there are lots of ways to start conducting science experiments right now with the help of what you have at home and the people around you. Read on for some tips to help you get started.

No matter if you live in the countryside, in a big city, or somewhere in between, taking an interest in your local ecosystem is a great way to spark ideas for experiments you can do on your own. From the effects of climate change on species to predator-prey interactions, there are a wealth of important topics in ecology you can start exploring in your own community.

If you want to stay close to home, you can choose to grow your own plants as your experimental subjects like Gregor Mendel did — in your backyard, on your porch, or even just on a window sill.

In a published paper, Polygencer Hana conducted an experiment to measure the effects of an invasive species of grass, Pennisetum villosum, on a California native grass species, Nassella pulchra, by growing the grasses side by side in two garden plots in her backyard. She set up sprinklers on timers so that the grasses in one box experienced drought conditions while the grasses in the other box experienced normal conditions. Each week, she measured the heights of the tallest blades of each type of grass, and through her measurements, she was able to conclude that the invasive species did not negatively affect the growth of the native species.

If you’re willing to venture out into public parks and habitats around your region, this opens up even more opportunities for observing species not just in manipulated experimental conditions but out in the wild under natural conditions.

Polygencer Baran went to his local beach in Southern California to investigate the diversity and abundance of organisms in tide pools as a function of their distance from the ocean. With a simple five by five inch wooden frame and a tape measure to measure out his three transects, Baran was able to compare the concentrations of crabs, hermit crabs, mussels, and coral at three different distances from the ocean shore.

If the outdoors aren’t your cup of tea, you’ll be thrilled to know that with a little coding knowledge, it’s possible to run experiments from right at your computer! Through utilizing publicly available datasets, you can write and test your own algorithms for diagnosing diseases, classifying tree species, predicting tennis court occupancy, detecting hazardous asteroids, and more.

Polygencer Jack created a machine-learning based diagnosis of Alzheimer’s disease which he tested on datasets of MRI brain scans. He found that his model achieved upwards of 80% accuracy in providing preliminary diagnosis of Alzheimer’s disease. Polygencer Maya won an award at the Alameda County Science and Engineering Fair for her original machine learning algorithm for early detection of Parkinson’s disease. Maya’s A.I. uses patient speech samples and analyzes them for distorted speech patterns like slurring and mumbling in order to provide a very accurate diagnosis.

Working creatively with the materials you have at home is a great challenge for any budding engineer!

You can try out building your own at-home version of high-tech lab equipment, like Polygencer Arjun did – he used simple home materials such as a fan, CD covers, and shoeboxes to build a functional wind tunnel. He then used his wind tunnel to conduct experiments on the flight paths of small objects.

You can also build a novel device and conduct experiments to test its effectiveness, like Polygencer Youssef did with his Auto Melter, an affordable device that automatically melts snow when it senses its presence using a variety of sensors and an Arduino. Assuming that most consumers already have a trash can and a drill at home to work with, Youssef’s amazing design was created with $200 worth of electronics and hardware easily obtained from Amazon and the local hardware store. 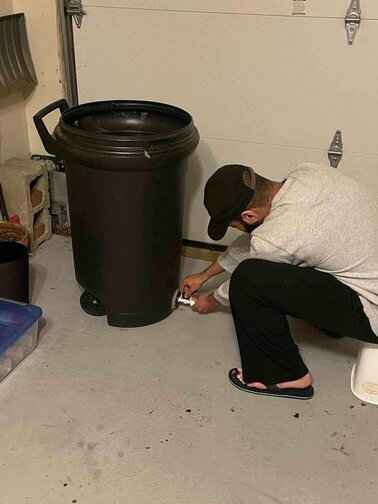 If you’re interested in testing a hypothesis about a human social or behavioral phenomena, then conducting a survey is an accessible and effective way to collect data on people’s thoughts, emotions, and experiences. You can make an online survey for free using Google Forms and find your test population virtually, or you can administer surveys to people in your school or local community.

Students at Polygence have designed and administered surveys on COVID-19’s impact on students’ mental health, the differences in STEM learning experiences for male and female students, the effects of marketing sustainability on consumer purchasing habits, attitudes towards nepotistic hiring across cultures, and much more!

If you need test subjects for an experiment, look to the people around you! Note that responsible researchers must prioritize the health and safety of their human subjects above all else, and approval or exemption from an IRB committee will likely be necessary if you want to publish or present findings from this kind of experiment.

Polygencer Anton recruited a group of subjects from his high school to participate in a four week study on the effects of low level laser therapy on anaerobic exercise performance. He used a PAR-Q survey to ensure that his subjects were in adequate physical condition before allowing them to participate, as well as requiring participants to do a warm up and cool down to prevent injury. These measures ensure participating in his study would not put an excessive strain on any participant's health.

Polygencer Jasmita enlisted 20 middle school and high school students to participate in her study of the effect of music familiarity on test anxiety and performance. Each student completed an ACT Reading section while listening to their assigned type of music and completed a reflection afterwards about their sense of their own distraction and anxiety levels.

Register for our Symposium of Rising Scholars to hear these students and many more present the findings from their projects.

Our Commitment to Social Impact