We are thrilled to announce that five Polygence students recently presented their research at the inaugural Symposium of Rising Scholars. The symposium’s mission is to spotlight exceptional research done by pre-collegiate students, all while giving the students a taste of conference presenting and academic networking. Each of the five students gave a ten minute presentation followed by a short Q&A session to their peers and a panel of experts in their academic fields.

Staci Hill, our Head of Customer Success, and Jin Chow, our COO, both gave brief opening remarks at the event. Staci highlighted how all the students in the symposium refused to be discouraged by the logistical limitations of the COVID-19 lockdown and managed to do amazing research from their own homes. Jin noted how the students’ incredible work despite the circumstances is a testament to Polygence’s goal of democratizing access to research and elite mentors. 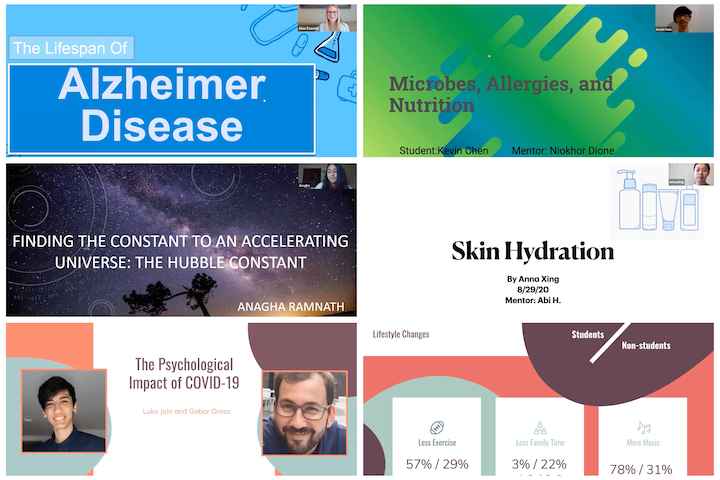 Alexandra, a rising senior from New Jersey, presented first, summarizing what she has learned through an extensive literature review of Alzheimer’s disease with her mentor Marija. Alex covered a swath of information about the disease in a clear and concise manner, moving from its biochemical origins to its anatomical effects in the body, and finally, to current and future prospects for treating the disease.

Kevin, a rising senior from Arizona, gave his presentation on microbes, allergens, and nutrition. Kevin traced the fascinating interrelationships between these three topics which he learned through reading scientific literature. He explained how microbes coexist with and benefit the human body, how our nutrition influences not only our own health but the health of our gut microbiota, and how a lack of sufficient exposure to microbes can potentially cause us to develop allergies to otherwise unharmful substances.

Anagha, a rising junior from New Jersey, gave a talk about the Hubble constant, which is a measure of the rate at which our universe is expanding. One of the biggest debates in modern cosmology is about the exact value of this constant, so Anagha decided to take matters into her own hands by using three different methods to make her own calculation of the constant. She compared the values she calculated with the current accepted value of the constant, and found that two out of the three methods she tried produced an accurate value.

Anna, a rising freshman from Massachusetts, presented her research on the chemistry behind skin-hydrating cosmetics. Anna studied the composition of the skin’s stratum corneum, the aquaporin proteins which transport water across the cell membrane, and the chemical functions of common moisturizing ingredients such as glycerol and urea. Anna’s research yielded insights that were both very intellectually rigorous and applicable to daily life!

Finally, Luke, a rising senior from California, gave the last presentation on a plethora of findings which resulted from a survey he conducted on the psychological effects of COVID-19. Luke was most excited about his survey’s adaptation of the Lawrence’s Kohlburg’s famous psychological experiment, The Heinz dilemma. By adapting this experiment, Luke found that participants had a more positive impression of a man hoarding supplies during the pandemic for his family rather than for himself, even though this act of hoarding has the same negative effect on society in both cases.

We are thrilled that our students had the opportunity to share their amazing work at the Symposium of Rising Scholars, and we hope to see even more Polygencers presenting at future iterations of this event! It’s an excellent opportunity to go beyond your Polygence sessions and get early experience in the most critical aspect of the research endeavor—sharing your findings with others.

You can read the proceedings and watch a recording of the virtual symposium here.